Welcome to a Colorful World

I want to share a piece of art with you that I just completed, but before I do I'd like to share the story behind it.  I hope you will bear with me, it will be a long story, but a special one.


Several years ago Mr. Flower Child and I sold our house in town so that we could move to a neighborhood where there would be other children for Flower Bud to play with.  So we settled in and shortly after I got a phone call from one of the neighbors.  A mutual friend had told her that we had sons about the same age and she wondered if we'd be interested in carpooling.  See, she had three children, all going to three different schools.  I said sure!  So they had us over for dinner for a meet and greet.  She had three wonderful children.  Her middle son was Flower Bud's age and they hit it off and became friends right away.  Her youngest child was her daughter who was just too pretty for words.  And then there was her oldest child, Zachary.  Zachary was a handsome boy, almost a clone of his father.  Zachary was very, very special.  See, Zachary was born with severe handicaps.  I could go into detail and tell you all the medical terms, but I think it would be best to tell you in terms you'd understand (besides, you know I can't remember all the medial terms).  Zachary was wheel-chaired bound, he could not walk, he could not talk, he could not see, he could not eat and received his sole nutrition through a feeding tube, he could not communicate at all.  I was astounded.  How in the world did they take care of this child!  It had to be so difficult!  Well, over the years as I got to know Zachary's mother better and I learned more of what all they had to do to take care of this special child I learned that it was indeed difficult, but I never once heard them complain.  Never.  Not once.  Even as Zachary continued to grow and became a teenager and his mother, who was very petite, would have to pick him up out of his chair by herself when no one was there to help, and get him into bed, or into the shower, her answer was to work out more so that she would be stronger and better able to lift him.  She never complained.  When he was sick and they couldn't figure out what was wrong because he couldn't talk and help them figure it out, all he could do was cry, she would become frustrated because she didn't know what to do to help him, but she never complained.  When he would spend weeks in the hospital, she would share her desire for him to get well and come home so that life could get back to "normal."  But she never complained.  Normal.  So many people take that word for granted, myself included.  I used to try to imagine how difficult it must be.  I think the best way to describe it would to be to imagine yourself taking care of a grown infant.  He grew like a normal (there's that word again) boy.  But I never heard any of them ever complain.  Ever.  Maybe it was because Zachary was a twin and the twin didn't make it so they realized how precious life is.  Whatever the reason I was always amazed at the grace with which they handled the situation.  I know I never could've handled it with such grace.  I would've probably complained to anyone who would have listened.  And instead of questioning her faith and God, it only made her faith stronger.  This family never complained and they never thought of Zachary as a burden, instead they thought of him as a gift.  We should all be so lucky.  God truly gave Zachary the perfect parents for him.


Well, the years go by and Flower Bud and Zachary's younger brother start middle school.  My work schedule changed and we could no longer car pool.  Flower Bud and his friend no longer have classes together and they sort of drift apart.  They are still friends, but they rarely see each other.  Zachary's mother and I also drift apart.  I quit my job, she takes a job.  You know how it goes.  Life is busy and before you know it months have gone by and you haven't seen or spoken to one another. Then I get a phone call one day.  Zachary had gone to live with Jesus.  I felt like such a horrible friend, he had been in the hospital for such a long time and I had not even known.  I was not there for my friend when she needed help the most.  I know she has plenty of family and friends, but it still hurt my heart that I had not been there.

So today is the one year anniversary of Zachary's death.  For a year I have been trying to get something of Zachary's that Mr. Flower Child could use on one of the beautiful crosses he makes.  I wanted it to be a surprise so I couldn't just ask for something.  Finally, one of the ladies who helped take care of Zachary at school gave me a DVD that he used to love to listen to.  A Barney's Colorful World DVD.  I have been racking my brain trying to figure out how to incorporate a DVD with a cross.  A Barney DVD at that.  Then yesterday it hit me.  (Dear Lord, why can't you give me my ideas like a week ahead of time!)  I have been studying a lot of mixed media art videos, especially Christy Tomlinson - luv her work!  Instead of a cross, I could do a mixed media canvas and incorporate the DVD!  This is what I came up with: 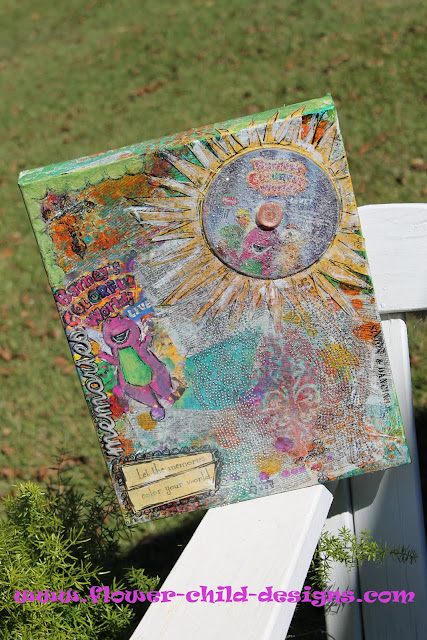 I wanted the DVD to sparkle so first I covered it in some glass powder that I had, but it wasn't quite enough bling so then I covered it in diamond dust.  I like the way it turned out.  I wanted to still be able to see the DVD below, but a more sparkly and muted version.  Oh, and I put a cute little button in the center where the hole is.  I cut pieces of paper and added them to kind of make it look like a star burst.  then I doodled and painted over the starburst. 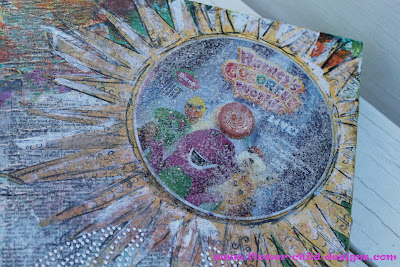 I tore the front off the DVD cover and then doodled and painted over it so that it didn't look like I had just torn and pasted it on there (which is exactly what I had done... hmm...  do you ever wonder about yourself sometimes?)﻿ 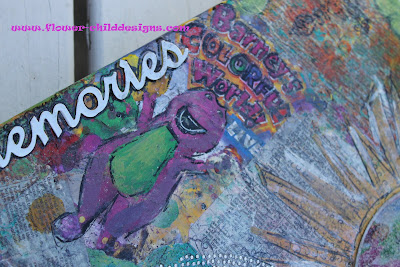 I found this rhinestone angel wing applique at Hobby Lobby.  At first I was worried it was a little too glitzy, but I think it works great with the diamond dust on the DVD. 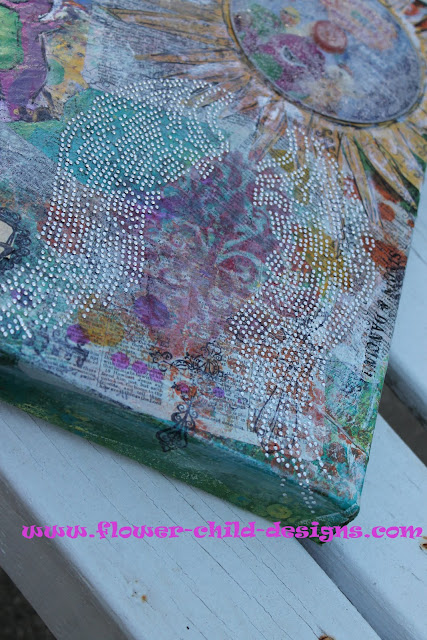 I stamped some crosses on there because my friend loves crosses and also to add some texture.  Oh, and all of those book pages you see - well, they are pages from a little new testament bible that I found somewhere that was falling apart.
﻿ 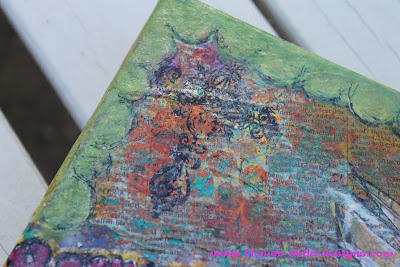 I added this rub-off on the side that says "singin' & dancin'" because once before when Zachary was very sick and looked like he wasn't going to pull through his mother and I talked about how she would feel if he went to live with Jesus.  She said that she would be soooooo happy for him because not only would he be going to live with our Lord, but he would finally be able to run and dance and sing!  Hopefully this will help her picture him singin' and dancin'! 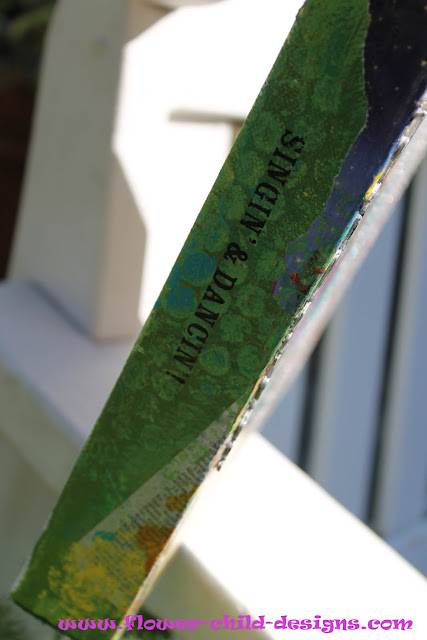 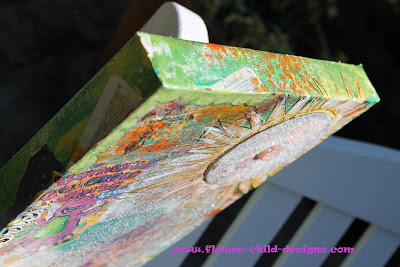 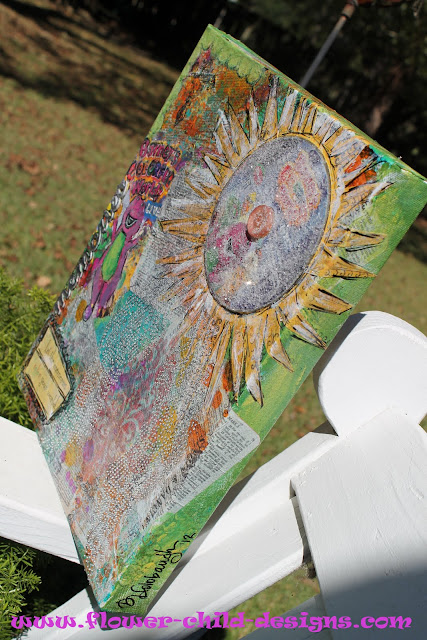 Is it the most beautiful piece of art you've ever seen? Well, no, but hopefully it will be beautiful to her, and I'm hoping it will make her smile and let the memories color her world. 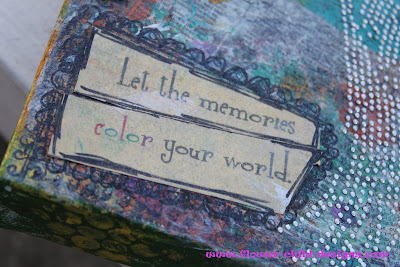 At the funeral a friend of the family read a poem that had been given to Zachary's mother shortly after he was born.  I'd love to share it with you:

WELCOME TO HOLLAND
by
Emily Perl Kingsley.
c1987 by Emily Perl Kingsley. All rights reserved
I am often asked to describe the experience of raising a child with a disability - to try to help people who have not shared that unique experience to understand it, to imagine how it would feel. It's like this......
When you're going to have a baby, it's like planning a fabulous vacation trip - to Italy. You buy a bunch of guide books and make your wonderful plans. The Coliseum. The Michelangelo David. The gondolas in Venice. You may learn some handy phrases in Italian. It's all very exciting.
After months of eager anticipation, the day finally arrives. You pack your bags and off you go. Several hours later, the plane lands. The stewardess comes in and says, "Welcome to Holland."
"Holland?!?" you say. "What do you mean Holland?? I signed up for Italy! I'm supposed to be in Italy. All my life I've dreamed of going to Italy."
But there's been a change in the flight plan. They've landed in Holland and there you must stay.
The important thing is that they haven't taken you to a horrible, disgusting, filthy place, full of pestilence, famine and disease. It's just a different place.
So you must go out and buy new guide books. And you must learn a whole new language. And you will meet a whole new group of people you would never have met.
It's just a different place. It's slower-paced than Italy, less flashy than Italy. But after you've been there for a while and you catch your breath, you look around.... and you begin to notice that Holland has windmills....and Holland has tulips. Holland even has Rembrandts.
But everyone you know is busy coming and going from Italy... and they're all bragging about what a wonderful time they had there. And for the rest of your life, you will say "Yes, that's where I was supposed to go. That's what I had planned."
And the pain of that will never, ever, ever, ever go away... because the loss of that dream is a very very significant loss.
But... if you spend your life mourning the fact that you didn't get to Italy, you may never be free to enjoy the very special, the very lovely things ... about Holland.