Recently I had someone ask about something they had seen in a photograph I had posted.  I thought some of you might be interested in seeing it also.  On the wall over my television I have hung an old screen door that I found at an estate sale. 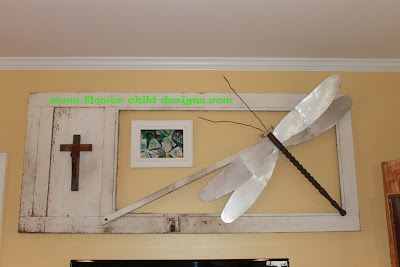 I love local history and the fact that I know where this door came from adds to the novelty of the item.  In fact, most of the older items you find in my house actually came from somewhere local.  I love being able to tell people who visit where the item came from which most find interesting.  Chances are if you see it in my house it is not something that I picked up in a thrift store or antique store, it is usually something I acquired locally from that building where it was located (does that make sense?)

Well, back to my screen door.  I hated remvoing the screen, but it was torn and not in an apealing way so I removed it.  I also had to remove the hinges and the handle so that it would hang flat against the wall, but I was able to keep the latch section. 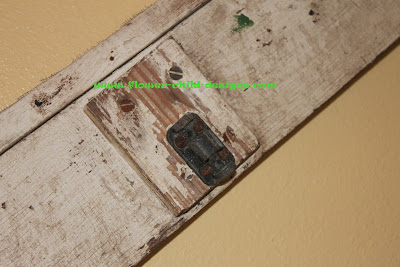 It is still a work in progress, but so far I have hung this large dragonfly I made: 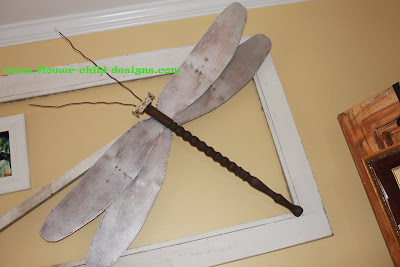 I also added a painting Flowerbud did in art class one summer.  I can't remember exactly how old he was, but probably around 6 or 7.  The local art center is fabulous and every summer they have these wonderful art camps for children.  My son attended every year until he was around 9.  I wish he took more of an interest in art because he is really quite talented. 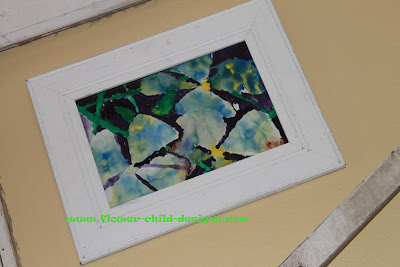 ﻿
The other item I have added is this wonderful cross my husband made me for my birthday.  He makes the most beautiful crosses from old architecture elements.  A local store in Fairhope sells them and they are quite popular.  This particular one has special meaning to me. 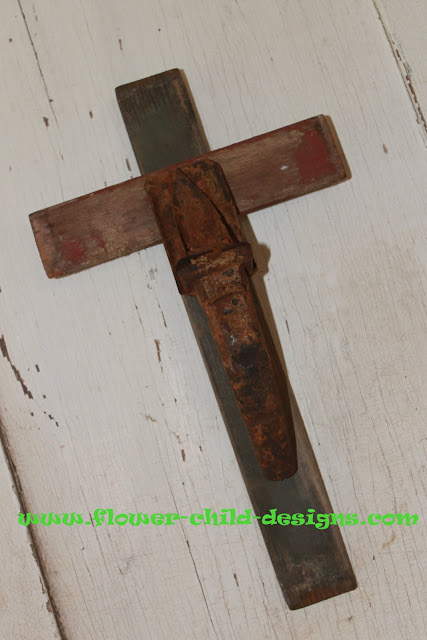 If you look closely you will see that in the middle it contains an old rusty oil nozzle.  You don't really seem them anymore, but they used to use them when changing your oil, it was made of metal and fit in the top of the oil can to make it easier to pour the oil.  Most people will probably find it strange to have a cross containing an old rusty oil nozzle, but that old rusty nozzle has special meaning to me.  See, my daddy used to be a manager of a gas station and he passed away the first week of my senior year of high school (let me just say that was a very long time ago!) and this oil nozzle is one that he used.  Apparently my mother found it a while back and gave it to my husband.  I know it seems silly, I mean who finds comfort in an old rusty thing like that, but the fact that my daddy touched it with his hands means more to me than I can say.  ﻿ 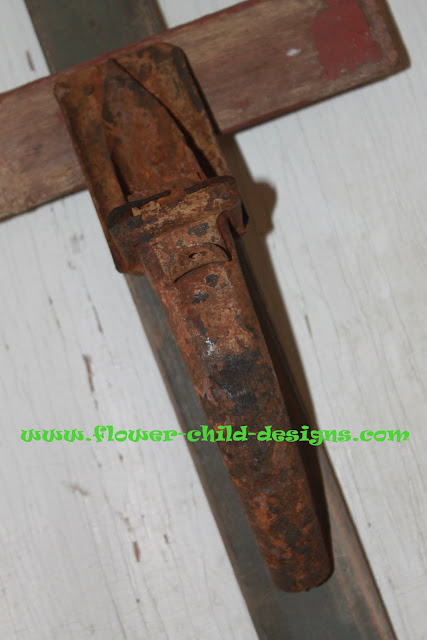 So that's the story behind my old screen door.  Hope you liked it!